Wow. What a reaction!

The anti vaxxers suddenly roared in here in droves – starting on April 1 (no joke here folks) this blog got 517 hits! Including 314 unique visits! And not surprisingly most of them came from anti vax central – America. And on March 31 their time of course. And it got even BETTER on April 2 locally with 2,814 hits and 2,150 unique visits! That blew Stat Counter off the chart, but I have back up on Word Press. I have had visits from Australia (second), followed by Canada, New Zealand and the UK – and another 20 countries on top of that! Today as of my last check this blog scored 774 hits with 594 unique visits.

All because I told the truth on Change.org.

The most popular page is the AV Name Check page, which I do need to update and I will once I clean up the past weekend on my website. That’s hardly a surprise either, and neither is the fact that the views on the blog entries have not attracted a single comment. Funny how they are willing to comment on Change.org (and indeed on Facebook itself as Melanie Jewell found out as she has kicked – I think six people now – off her page) but outside their control zone they don’t want to know. It says a lot.

Most recently, I started a single thread on the last entry on the Tribeca petition (the one to bring Vaxxed back – doomed to fail) celebrating the 30,000th signature. 30,000 idiots in other words. In it I started a thread under my political account and said the following;

Here’s the rubbish that followed with my responses – and I did block everyone as soon as I posted, except for Tia Severino upon the first reply just so she saw that (and she’s getting a separate entry by the way). 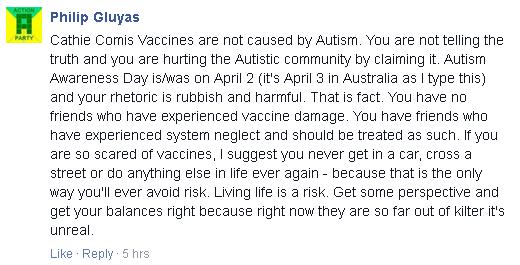 Mae Fields disappeared before I could take any screenshots by the way.

This is what the world is coming to. I was talking to a staffer (who I won’t name) at the office of my local member of Australian Parliament, and she observed that the anti science sentiment across the board (not just in vaccines) was increasing. Climate change is a good example of it. I tend to agree, and it’s a threat – because what is the natural alternative to science?

That’s why I’m fighting this nonsense, because reverting to religion (and it would be a reversion) would set human progress back 50 years at least. It would also be heaven for Islamic State because that would add focus on their extremist views and worsen radicalisation lines. This is not just about vaccines now – it’s becoming a wider issue. That’s scary and it has to stop now.

17 thoughts on “Thank you, Anti Vaxxers!”