I’m dedicating this entry to the battle for the truth when it comes to vaccines, and little Miss Norty AKA Courtney Hebberman is not telling it – and never has.

I just want to reference the results of my web search when limiting it to Facebook. The first thing that came up of interest required a cached version, but look at this;

Now I’m not for one second justifying the general behaviour of the male employee here, but think about this. Maybe he knew that she was an anti vaxxer? If that was the case then she deserved the earful and in spades. Hebberman proved that she has an exaggerated sense of entitlement going the vexatious line with the threat about the ACCC! Consumer affairs handles that sort of complaint, idiot! I intend to visit this place in Prospect next time I’m in Adelaide in order to ensure that the threat to their community standing is rendered useless if I can.

Also on the list was a couple of references to political groups by Mark Rayner, including the Involuntary Medical Objectors party and the page for Meet Aluminum Research (American obviously). There was also a question from 2014 from Hebberman wondering who the admin was for the Peramangk Nation page (that one was also cached).

She conversely gave five stars to the Aboriginal Diabetes Study, and of interest she said that “About time there is headway into one of the chronic illnesses afflicting our people” (bolded word mine). Aboriginal heritage? Worth looking into.

On the second page of the search, there was this that also required the cached version; 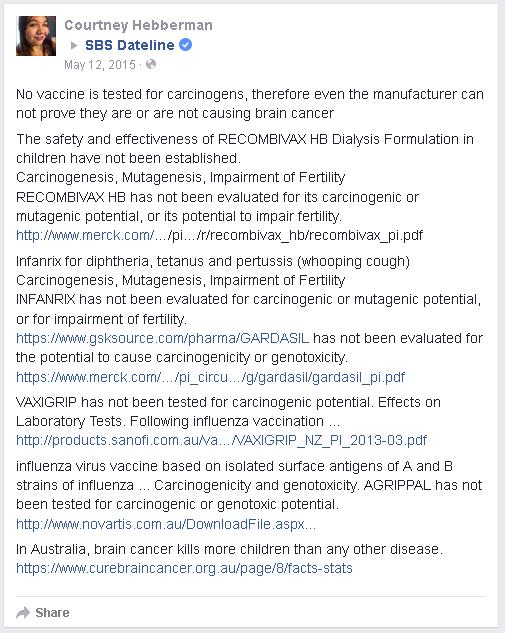 I’ve said this before – in Australia the tests HAVE been done. They have to be in order to be approved. It’s the law. So all those references are useless, and the incidence of brain cancer is nowhere near the levels of preventable disease. Hebberman wants children to be sick as long as they don’t die. That’s sick and worth the abuse from the guy in Prospect (if that was why he did it I hasten to repeat).

Another cached result revealed a link to a BS article putting over proven quack Archie Kalokerinos and putting the flu vaccine over as dangerous to Aborigines citing a “forced vaccination” campaign at the beginning of the 1970’s and combining it with the bad Fluvax batch that was found in Western Australia in more recent times (when the two were totally separate). It was placed on the page of Esai Morales.

Breast milk for a six year old kid? WTF?? You idiot, Hebberman! And breast feeding until he was THREE?? WTF#2?? I’m surprised this stayed on the page long enough to be cached when you consider it was originally posted in 2013! Is the child (who would now be nine years old) still drinking breast milk? I should hope not!

I should note the brilliant note put on this blog’s Facebook page by one of the other admins that appeared on the second page of the search. It was a story from The Age that Hebberman must have put over as mind blowing (Big Pharma not paying their fair share of tax) when in fact – as the other admin said – so did Google, Apple, Microsoft, News-Corp, Pepsi “etc etc”.

Predictably, Hebberman gave five stars to the University of Wollongong – who honestly need to be called to a count for their general conduct re Judy Wilyman. Not surprisingly my pro vaccine friends were all over that in the comments.

My last note for this entry is the hilarity over the fact that a Facebook search for “Rat Courtney” showed up on the second page referencing Hebberman as a possible option for that search!!

You have to love karma!!