It was brought to my attention on the comments of a You Tube video by my good friend and fellow Autistic Fiona O’Leary that we have another candidate for the AV Name Check. I had a look and it looks like this one is a candidate.

A quick skim of a web search revealed that it looks like she lives in Gadsden, Alabama in the US. She must be in the anti vaccine loop because she knew about John Piesse here in Victoria so it makes sense that she’s a typical American anti vaxxer loaded with conspiracy theories and also making claims without medical proof. That goes back to my “Once and for all – Prove it” entry again. Here’s the link again.

Let’s review some of these comments.

First off Tommey isn’t a doctor, and she is a liar and manipulator. It’s not without foundation that she was kicked out of Australia. She doesn’t have a vaccine injured son. She has an Autistic son. Two totally different things. What you witnessed was taken into account by the doctor and ignored because you were wrong. Everyone asked were telling the same story because they refused to believe the truth out of paranoia and stupidity. And it’s interesting that Rowe admits that Vaxxed is about the MMR vaccine when the promotional material disowns any connection to vaccines. That one she told the truth about and it proves that it IS an anti vaccine film! Owned! What scares us is the lies being told being believed leading to less vaccinations and more preventable disease and more childhood deaths!

Tommey should be in jail. She is lying witch. The Court of Federal Claims (the Vaccine Court) is a joke because it doesn’t follow the rules of evidence that a court should, so it pays out too easily. If it did the payouts would be a whole lot less, if not zero! 50 percent and a feather is not a high standard of proof! The fee does exist and that was part of the agreement met in 1986, and frankly it should be taken down not because it protects Big Pharma but because it protects negligent doctors and nurses who make the mistakes with vaccines that do injure. Vaccines themselves have NEVER injured anyone. Any injury is caused by the system. The inserts – and this was mentioned in reply on the comments – are legal statements and have no medical value. VAERS is an unreliable repository that is loaded with false claims because anyone can report an incident and not need to medically prove it. The only people playing Russian Roulette are those who won’t vaccinate. The Supreme Court never made any ruling on vaccines themselves and this was expanded on;

Researched where? Google? Get out of here, Rowe! Google Uni is closed to people like you because you only read what you want to read! She put the noose around Justice Scalia in particular, but Scalia NEVER said the words “unavoidably unsafe”.

Oh what a liar! Again – the words “unavoidably unsafe” were never used in any opinion, not just Scalia’s! Rowe never read it, or rather she never understood it. Now while the claim itself was about involving vaccine design and that wasn’t covered by the Vaccine Court so pharma could be sued for it, it was also ruled that all vaccine related matters go to the vaccine court. So that in fact allows for the Vaccine Court to make recommendations, leading to better design. But given the poor standard for proof in the Vaccine Court Big Pharma doesn’t have to listen. There was NO discussion on the term “unavoidably unsafe”. The risk of injury lies in usage and not the vaccine itself. When the system is working properly, vaccination is safe. Any side effects are minor. Risks were never considered by the US Supreme Court. 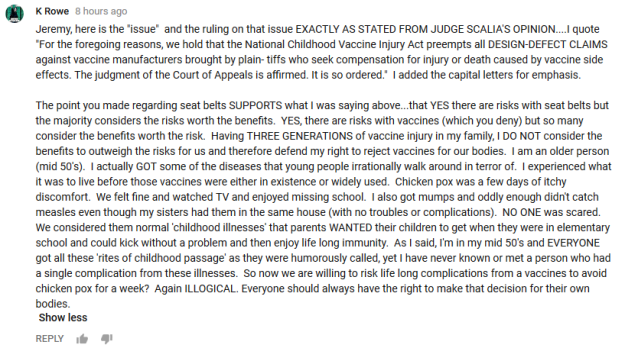 Rowe called out on the first paragraph and I’ll repeat it. A design-defect claim does not mean unavoidably unsafe. I’ll clarify that by saying that the claim needs to be proven first, and also that unavoidably unsafe does not correlate with that as a defect can be corrected. Therefore the lack of safety (supposed) is removed and is therefore not unavoidable!

The second paragraph suggests that Rowe is making the same claim as Tommey (and Ginger Taylor). That vaccine injury equals Autism. The main suggestion is that it “runs in the family”. Autism would run in a family – it’s genetic. Getting the chicken pox does NOT confer lifelong immunity (my sister in law got it twice!) and any childhood disease has the potential to kill! I repeat the reference re the measles that I have made before – Olivia Dahl. I got the measles and it was far from pleasant. My sister did too. She got the Chicken Pox and the Mumps (I avoided both somehow). I remember the Mumps being really nasty. If those conditions didn’t scare you then you are an idiot! Confirm the Autism is your family so I know what I’m dealing with.

This is another reference to Google. You don’t know more because what you “know” is wrong. You haven’t proven you are a member of the “vaccine injury club”.

We all know a liar when we see one, Rowe, and you are a liar. You don’t know yourself or your daughter and that’s dangerous to both of you. I’m a paralegal – which is as close as one can get to being a lawyer without doing the study and getting the qualifications – and I can tell you that you didn’t understand what you read in that Supreme Court decision. Your medical experience (based on your own words) is faked because you wouldn’t listen to your doctor in the first place as stated further up. The minute you do that, your experience means nothing.

These screenshots were sent to me and I am told there was one more that was deleted, but the content was retained in an automatic email. I won’t reproduce it, but Rowe claimed to have a “Jurist Doctorate”. I looked it up and it’s actually a Juris Doctorate, and in the United States this does not require scholarly content. It is required in Australia and other western countries (how dumb is the US huh?). Either way, Rowe has never been before a judge presenting a case. I have.

This is going to take two entries so I’ll leave this here and finish it tomorrow, including maybe an update as I expect this entry to be linked to Rowe. If she wants to react to it – do that here and not on You Tube as I do not have an account there. Using others as informants for this is not appropriate in this case.