There’s an old story that the residents of the whole of New York City is divided clearly between New York State and New Jersey, and not just by the Hudson River either. By intelligence. If you’re on the NY side, you are of higher intelligence. There are exceptions of course (an old friend from the 00’s was a Jersey girl as an example), but then there are those that prove the story true. Aside from WWE loudmouth Enzo Amore, who hails from Hackensack, we also have Walter Kryshak.

This 60 plus native of the Jersey side of NYC is an anti vaxxer who is so into it he just won’t listen to anything that proves him wrong, even down to being told about compounds and backed up by the poisons liquid hydrogen and liquid oxygen combining into a safe compound called fresh water (not to mention the poisons sodium and chlorine combining into a safe compound called salt!) – and not understanding a word that was being said!

Earlier this week when I updated the AV Name Check after having at him one more time on the Daily Advertiser’s story about No Jab No Play in New South Wales (why this Jersey Jerk-off thinks he can get involved in Australian business is ridiculous in itself given he has no clue of how we do things, unlike me as I do understand how they do things in the US and have criticised it as well). Of course, I gave him the list announcement meme that I think readers would be familiar with by now. And then I blocked him. I already had a mess of screenshots.

Some lowlights of his claims are primarily based in memes – in a way a lot like Frankie Vasquez and his penchant for them. Kryshak isn’t as bad as Vasquez (no death threats or foul language) but he is just as delusional at least. For instance;

Those are there to cover for errors by doctors and/or nurses. System errors as I have called them for some time now.

This is why he shouldn’t be involved – mandatory vaccinations won’t happen in Australia due to the Constitution prohibiting medical conscription. Along with the fact that the TGA would have done the study he claims hasn’t been done! Not to mention there being a book on it called “The Childhood Immunization Schedule and Safety” published in 2013 by the National Academies Press;
https://www.nap.edu/read/13563/chapter/1

For every billion they make on vaccines they spend just as much on creation and research, and I said as much in reply as well.

They have a place when they are needed for the health of the community! Vaccines have never killed or even injured anyone by themselves and that’s a demonstrable fact. What’s child abuse is leaving a child wide open to catching a preventable disease that can kill.

See now this is the perfect example of why I am involved in this fight. This hate speech effort over the cause of Autism! Aside from the fact that this 1 in 36 figure is out of someone’s rear end, Autism has always been prevalent at much higher numbers than that 1 in 10,000! Guess who wasn’t part of that percentage? ME! If the diagnostics were right in 1980 that figure would be very different!

Then of course there were his sources;

I also want to speak of a 21 question rant that Natural News put. Here they are – followed by my answers to the questions that Kryshak just totally ignored!

Question #1) If measles vaccines confer measles immunity, then why do already-vaccinated children have anything to fear from a measles outbreak?

Question #2) If vaccines work so well, then why did Merck virologists file a False Claims Act with the U.S. government, describing the astonishing scientific fraud of how Merck faked its vaccine results to trick the FDA?

Question #3) If vaccines don’t have any links to autism, then why did a top CDC scientist openly confess to the CDC committing scientific fraud by selectively omitting clinical trial data after the fact in order to obscure an existing link between vaccines and autism?

Question #4) If mercury is a neurotoxic chemical (which it is), then why is it still being injected into children and pregnant women via vaccines? Why does the vaccine industry refuse to remove all the mercury from vaccines in the interests of protecting children from mercury?

Question #5) If vaccines are so incredibly safe, then why does the vaccine industry need absolute legal immunity from all harm caused by its products?

Question #6) If vaccines work so well to prevent disease, then why do some vaccines (like the chickenpox vaccine) openly admit that they can cause the spread of chickenpox?

Question #7) If vaccines are so great for public health, then why do these historical public health charts show nearly all the declines in infectious disease taking place BEFORE vaccines arrived on the scene?

Question #8) If vaccines are perfectly safe, then why did at least 13 people recently die in Italy after being vaccinated?

Question #9) If vaccines are so trustworthy, then why did a pro-vaccine group in Africa recently discover — to its shock and horror — that vaccines being given to young African women were secretly laced with abortion chemicals?

Question #10) If vaccines are backed by solid science, then why do some vaccine inserts openly admit they are backed by no clinical trials?

Question #11) If vaccines are so safe, then why does this vaccine insert admit that the Gardasil vaccine causes “acute respiratory illness” in babies who consume the breast milk of mothers who have been vaccinated?

Question #12) If vaccines are so safe, then why does this Gardasil insert sheet admit that the vaccine causes “seizure-like activity, headache, fever, nausea and dizziness” and can even cause those injected with the vaccine to lose consciousness and fall, resulting in injury?

Question #13) If vaccines are totally safe, then why do vaccine insert sheets disclose a long list of frightening and bizarre side effects associated with their vaccines?

Question #14) If vaccines are backed by so much “science” then why do they frequently admit there really aren’t any studies of the vaccine for the very groups of people who are often injected with it?

Question #15) If vaccines are so safe to give to pregnant women, then why do the vaccine insert sheets openly admit most of them have never been tested for safety in pregnant women? In fact, this vaccine admits “the effects of the vaccine in fetal development are unknown.”

Question #16) If vaccines are so safe to be injected into the bodies of children and pregnant women, then why do their own insert sheets readily admit they are manufactured with a cocktail of toxic chemical ingredients including “fetal bovine serum?” (The blood serum of aborted baby cows.)

Question #17) If vaccines achieve absolute immunity, then why are as many as 97 percent of children struck by infectious disease already vaccinated against that disease?

Question #18) If vaccines are totally safe and effective, then why did this five-year-old girl recently die from the very strain of flu she was just vaccinated against?

Question #19) If the mainstream media claims to report honest, unbiased information about vaccines, then why was there a total nationwide blackout on the news of the CDC whistleblower admitting vaccines are linked to autism?

Question #20) Why does the CDC falsely claim all vaccines are completely safe and effective when its own website still lists the toxic chemical ingredients used in vaccines?

Question #21) If the vaccine industry cares so much about children, then why does it call for the arrest of parents and the breaking up of families of unvaccinated children, begging for the state to seize custody of those children at gunpoint while incarcerating the parents in prison? 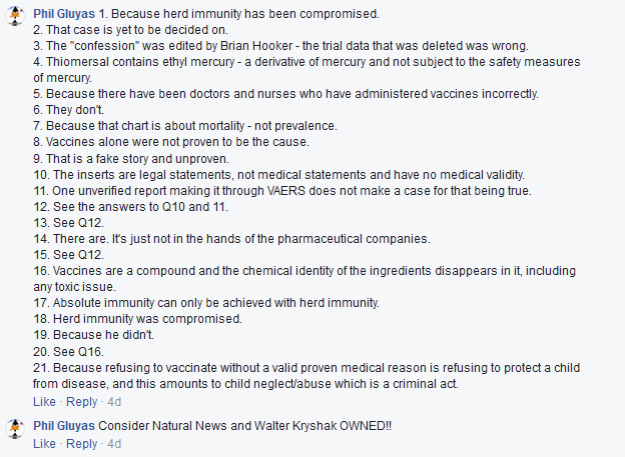 That’s all I have time to put for the time being – but I think that’s enough anyway. This guy is a maniac and should be arrested for inciting child neglect. He has no idea – at all.

1 thought on “Wally Cry-Shak is off his rocker”