When I posted the first of the two entries here on Solihin Millin I posted the link on his timeline under the thread started by his publication of his April 5 appeal. Not surprisingly there was no reaction here on the blog. But there was plenty on the comment I put. Usually I put only the comments of others here but to save time typing I’ll put the lot instead including my own comments. Millin himself responded first before the others. 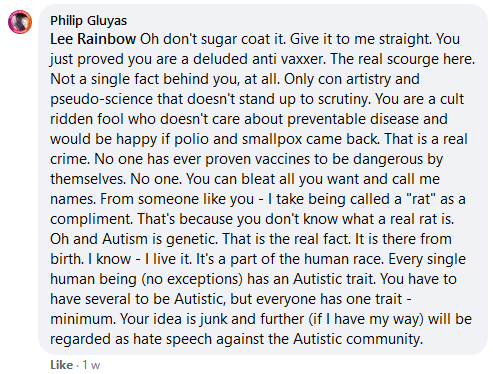 Two days after posting the first entry here I posted the second link on his timeline under the same publication. And no reaction at all. What a pack of cowards.

It was pretty clear that these were all anti vaxxers. Suck ups to Millin’s demented mantra simply because of his claimed intelligence. Intelligence is only as good as how you use it and that’s why education levels are ultimately irrelevant.

Take Russell Craig – an associate administrator with Diamond Russell Lawyers in Thailand. Not an actual lawyer and yet mocks me for my three wins in the most complicated area of law there is – defamation. He claims to have studied law at the University of Sydney so he should know that! Maybe that’s why he’s nothing more than an administrator. Or he didn’t bother looking at the cases. He blocked me as you saw in the comments above but I got him back anyway thanks to one of my other accounts. Subsequently I checked in without logging in as I was able to once I had the direct link. And elsewhere on Millin’s page he said the following about me. 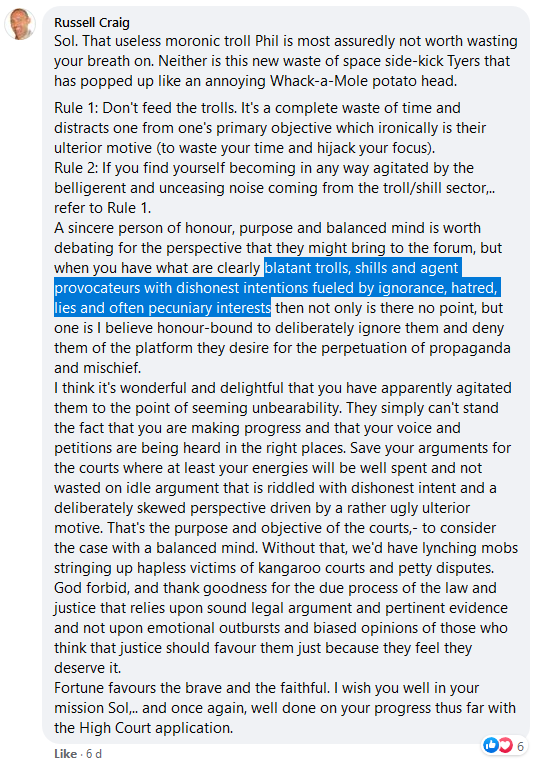 Re Rule 1 – It’s Millin who is wasting the Court’s time. Also, the idiot claims I’m not a “sincere person of honour, purpose and balanced mind” but rather one of a number of “blatant trolls, shills and agent provocateurs with dishonest intentions fueled by ignorance, hatred, lies and often pecuniary interests” (as I took the screenshot this was highlighted). Let’s make this clear – Russell Craig has no honour. He wouldn’t have blocked me if he did. He doesn’t have a balanced mind either. He is the troll and the agent provocateur, and definitely has dishonest intentions laced with ignorance, hatred and lies. I don’t have any money at stake in this at all. Of course he won’t believe that like a typical anti vaxxer. Millin is getting nowhere and is not being heard and Craig can’t see it. There will be no arguments in the courts because he won’t get there. Craig talks about the due process of law. The due process of law right now is ignoring Millin and it will continue to do so. Progress? There is none.

Greg Hall’s on the Gold Coast and has been self employed since late 2017, and that’s all. Pretty much locked down otherwise and nothing useful on his timeline.

Lee Rainbow’s profile is locked down as well, but there’s a lot of BS on his timeline – eg Bill Gates makes money from vaccines (rubbish), claiming that there is already a COVID-19 vaccine that killed seven children in Senegal (rubbish – there is no vaccine yet) and an archived load of crap about Judy Mikovits (look her up on Wikipedia and read the sources for what really happened). Not to mention sharing paranoid BS from a group called RESET Parliament (Australia) and I saw a blatant case of hate speech against Autism claiming that 1.2 million diagnoses is an “epidemic”! Says plenty about this one on top of what I said above in the comments on Millin’s timeline!

They were the three main issues, and guess what all of you?