And no surprise – the loyal cult followers are up in arms!

The term “Batshit crazy” aren’t my words by the way. They were the rightful words of Victoria’s Deputy Police Commissioner Luke Cornelius. And you can see here the source of his remark.

It is plain that the Deputy Commissioner was given a brief of the contents of Millin’s desktop. This will undoubtedly include his High Court paperwork and the other material I have reviewed previously on this blog. After seeing that brief, Luke knew that Millin was a total nutcase. Not to mention this;

So all of Millin’s rantings were recorded as well. This adds to the genuine truth behind the Deputy Commissioner’s comment.

Millin’s arrest is for organising the September 5 Freedom Protest in Melbourne – for inciting others into committing a criminal act. Under the State of Disaster, restrictions are in place that are enforceable by criminal law. Flouting those restrictions by themselves is a criminal act and warrants the minimum of a fine – whether it be $200 for not wearing a mask without a lawful reason or the higher fines. Demanding an end to the lockdown instantly for one’s freedom is not an option. Our freedom was removed by a deadly disease called COVID-19 – something that Millin believes doesn’t exist because it hasn’t been isolated. It has been isolated – it is impossible to have a vaccine at the human trial stage (it’s actually more than one) without such an isolation. Millin is only saying that because of his long held demented view about vaccines in general and he doesn’t want this one any more than any of the others.

His followers are just as nuts and it wouldn’t surprise me if there was a brief on Millin’s Facebook timeline and the comments on there as well. I mean look at some of these gems!

A hero?? He’s a reckless traitor! The rest of that is downright stupid and dangerous. If that happened we would have a jump in cases without a doubt undoing all the good work we’ve done.

He has a black heart. There has been no injustice here.

You don’t know what Nazi Germany was, idiot! If this was Nazi Germany, Millin would be dead and so would the rest of you as you would have been found and executed as enemies of the state right alongside him.

Another inaccurate reference to Nazi Germany. The fight is over because it is the wrong fight. The right fight is being fought against COVID-19.

Teffaha is the wrong person to contact in this. She is useless – a failed whistleblower from the tax office who tried and failed to take her issue to the Federal Court.

Harmless? He is spreading blatant lies about a number of things and is the real threat to humanity as he isn’t taking COVID-19 seriously!

He deserves nothing but derision as as I said in the previous entry about him – a jail term.

You can’t take them back because COVID-19 will knock you over if you try.

I laughed when I saw this. Thanks for the publicity, dummy! This blog by the way isn’t dedicated to Millin.

This was a reply to Ick’s comment. I’m not an anti-truther. I tell the truth. You lot wouldn’t know the truth if it hit you on the back of the head.

This was also a reply and I laughed at this one as well. I don’t get a cent from Big Pharma! If I was working for them I haven’t been paid! Where’s my cheque huh? LMAO!

Oh we know enough about him to know he’s out of his mind, Ick!

See this is a classic example of what I’m talking about! DNA altering vaccines? GMO’d humans? Real life isn’t the Sci-Fi channel, you goose! And no wonder – look at her surname! 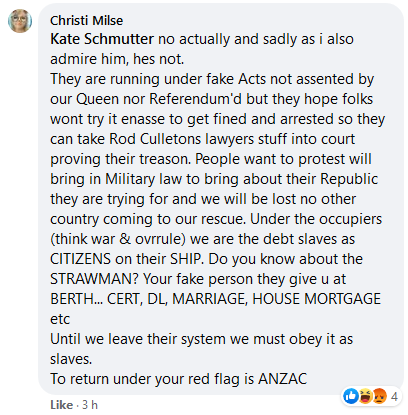 Here’s another classic example of what I’m talking about! Crazy! The Australia Act was assented by the Queen, streamlining the assent process and making it quicker by passing the job to the Governor General – the monarch’s representative per the Constitution. The reference to Culleton is about his claim that he was removed from the Senate illegally – which was BS as he was an undischarged bankrupt and had a court matter that had a maximum term of two years active at the time of his election as a Senator. He has nothing to complain about and is not a “Senator in Exile”. The nonsense about “ship” and the “red flag” is an irrelevant reference to the Navy’s red ensign.

Oh what rot! The PEOPLE voted for Federation and have voted for every Federal Parliament since! It’s called a democracy!

There will be no prosecutions because there is no fraud.

How dare this idiot invoke Nelson Mandela! That’s an insult! Not to mention what he did with his name!

This is null and void when such an action threatens the health of the community. Community health takes priority.

For what? For doing their job per state law? Such a class action wouldn’t get past the court registrar because it’s frivolous and vexatious.

You haven’t lost it, moron! The present plan is to rid the country of COVID-19. This witch is against that obviously.

This isn’t about Freedom of Speech. It’s about inciting a criminal act. There is no Communism.

He isn’t speaking the truth. The only tyranny is being attempted by COVID-19 and the narrative is to control that. You are being governed by a government who cares. If you don’t want that – get out of Australia! We don’t want reckless manslaughtering anarchists like you here!

After repeating her previously shown comment she put this with an anti Semitic addition. Goldman Sachs is a Jewish bank and the claims made there are consistent with the Rothschild Family conspiracy junk that is absolutely anti Jew and therefore anti Semitic.

She repeated this one twice as well.

No it won’t – unless one is pro getting on top of this pandemic and supportive of the actions being taken. It will be a horrible day for Millin, and fabulous day for Victorians who are doing the right thing. And yeah – a fabulous day for yours truly! 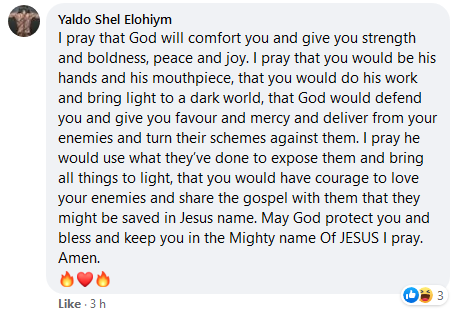 I don’t need to say anything to this one.

I think this (combined with the previous comment) is proof that Millin is a cult leader and this follower is totally in his power. He needs help.

Justice will be served when Millin is brought before the courts and found guilty. There is no fascism in this state. Fascism is a right wing mantra – the Andrews government is left wing.

It’s COVID-19 that’s doing that, and Millin is standing up for it destroying us.

Because it’s the perfect way to catch dangerous old farts like Millin who think they are invincible and have no respect for the real world.

We have a right to be scared of idiots like you lot – you are threatening the entire community with a third wave of COVID-19! Yes you haven’t gone out yet, and you aren’t going to in order to make sure COVID-19 is under control! What will happen IF you do? You’ll be fined and maybe arrested if you don’t give and prove your correct identity. That is on you and no one else. STAY HOME!! 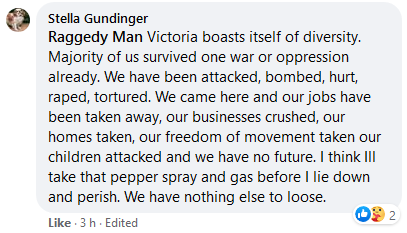 Okay this one clearly needs help. The jobs will be back as will the businesses and the homes. Freedom of movement will also return. There is a future post COVID-19 and you should embrace it and not assume it won’t be there. That attitude is only for cowards.

The ultimate human rights breach has been committed by COVID-19. It has to be controlled and everything needs to be put on hold to preserve lives. That is what we are doing. That is what New Zealand did and they opened up for three months. The US never did it and they are the worst afflicted in the world. Brazil never did it either and are second worst afflicted. That is what would be facing us if we treat COVID-19 like it doesn’t exist. They can do what they did and the book will be thrown at Millin.

There is a lot more but I have to stop there as I want to upload this as quickly as possible. I encourage the prosecution to ensure that this moron is put in a padded cell, proverbially speaking. Thomas Embling Hospital would be the obvious choice, but maybe the mental health ward at the Alfred would be more practical. Either way, I hope the circumstances prevail that warrant a Court Assessment Order under the Mental Health Act. Millin is a nutcase – fruitcake standard.

Hopefully by the time his case comes up the restrictions will be to a level that I am able to attend. That depends if it is being expedited or not.

And the rest of you? STAY HOME ON SEPTEMBER 5 (and on all other dates in Victoria until at least September 14)!!