I’ll preamble this entry with a couple of notes – G & B Lawyers don’t take COVID-19 seriously. They are seeking to re-open borders immediately despite the continuing presence of the virus without any defence other than the restrictions we presently have and clearly don’t care about the consequences. For example just today they said; “There is no medical evidence whatsoever to support the ongoing direction for Victorians to wear a mask. Masks are of zero health benefit to anyone. Chairman Dan is simply a control freak.” 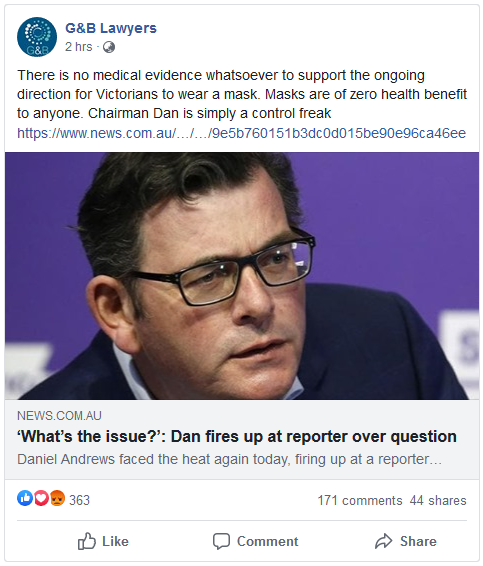 The story they are talking about said nothing about any actual challenge based on any medical advice. It was all about the Premier not being happy with a regional MP calling for masks to be made optional in regional Victoria – which would undermine the effort especially on the fringes (like the Macedon Ranges where I live – where yesterday there were still two active cases). G & B Lawyers have no evidence that fitted masks don’t work. The claim is rubbish.

Okay, this is American – but it’s no less relevant and comes from professionals. Masks work.

Another note – G & B Lawyers are also into conspiracy theories, stating in response to another story; “This is obvious”.

The story merely mentioned the conspiracy theory, and then shot it down as it deserved to be. It’s clear that G & B lawyers didn’t actually read the story. Nor do they get that the measures China took didn’t work as well as certainly they did here or more importantly in New Zealand. And we have great examples of countries who ignored the tactic – the USA and Brazil. G & B Lawyers can say “Chairman Dan” all they want – it doesn’t make it valid. Where are the “Chairperson Jacinda” jibes? Nowhere. Totally inconsistent. Moreover, China’s numbers are still way worse than ours – as I type this Wikipedia (with the appropriate source) has China’s total case load at 85,372 and 4,634 deaths. They have 185 active cases as well. In Australia we have had 27,044 total cases and only 875 deaths. We have more active cases of course (455) due to the ongoing recovery from Victoria’s second wave. It says plenty.

But the main reason for this entry is their act of total medical incompetence over No Jab No Play and related matters regarding compulsory vaccination for workers in day care and aged care – specifically the flu vaccine. I take the following from their Go Fund Me which should have been deleted and hasn’t been for some reason;

The updates are as follows;

AUGUST 12, 2020
Today we had a matter listed in the Fair Work Commission. It was the first telephone conciliation for this particular client.
Our client was terminated from the client’s job at an aged care facility in NSW for not having a flu vaccination when the client had a medical certificate that was in the approved form issued by NSW Health and in accordance with the Public Health Order (No 2) 2020 (NSW).
The respondent aged care facility did not agree to reinstate our client.
We will now have this matter determined by a Member of the Fair Work Commission.
Mr Jim Pearce, barrister has been engaged to appear for our client.
This is certainly looking like our test case.
If the Member of the Commission refuses to reinstate our client, our intention is to appeal the decision to the Full Bench of the Commission.
Thank you for your ongoing support.

AUGUST 28, 2020
Today we were before the Commissioner for a conference in the matter I referred to in the last update. The matter still hasn’t settled. So our test case continues. Keep sharing the campaign.
I’m also aware that a number of Goodstart Early Learning employees have been fired for not having flu and whooping cough injections. If you are one of those employees get in touch with Nathan. We can run a class action for you. <<

SEPTEMBER 4, 2020
We are now taking on Goodstart Early Learning for terminating employees for not having a flu shot.

SEPTEMBER 6, 2020
The Commonwealth Government plans to take away your rights to an education, employment and overseas travel. Read the second paragraph. You can’t make this stuff up.

SEPTEMBER 16, 2020
Big week next week in the Fair Work Commission. Conciliations with Goodstart and an aged care facility for firing employees for not having a flu vaccination. Bring it on.

SEPTEMBER 22, 2020
Goodstart did not settle at conciliation today. So we now progress to a Commissioner. Essentially Goodstart’s position is that in their view it is a lawful direction to engage in assault and battery without the consent of the employee. Such a direction can never be lawful. Please share this update widely to get further support for our client who was unlawfully terminated by Goodstart.

SEPTEMBER 25, 2020
Had another conciliation terminated today. This time it is Resthaven Incorporated, an aged care provider in SA who fired our client for not having a flu vaccination. We crack on to a Commissioner.

First, I’ll just reference the quote from September 6 – this is a reference to the standard letter from Medicare about immunisation’s being overdue. G & B Lawyers assert that it’s a blanket threat to their access to all education, employment or travel overseas. That is scaremongering at it’s finest. At worst all three could be restricted somewhat, but eliminated entirely? Absolutely not!

A background on the other parties. Goodstart Early Learning has centres in every state and territory in Australia totaling 644 facilities. The assertion of “assault and battery” is difficult to believe. I would suggest they are being facetious with the definition. Resthaven, as indicated, is an aged care provider that has 12 facilities in South Australia – 9 in Adelaide and the others in Murray Bridge, Port Elliot and Mount Gambier. The other aged care facility in New South Wales isn’t named.

The mention of Public Health Order (No 2) relates to COVID-19 from what I can tell. The claim on August 12 appears to suggest that the employee couldn’t have the flu vaccine for a legitimate medical reason. Under normal circumstances this would be fair enough – except in one circumstance that actually exists at present. The threat posed by COVID-19 makes herd immunity from the flu even more important than usual until such time as a vaccine for that is available. There will be a number of residents who could not be vaccinated for the same reason, meaning that employing someone with such a restriction would be too risky. Unjustifiable hardship would apply in that instance. The employer is therefore quite within their rights to say “No”.

I certainly hope the Fair Work Commission see this. Of course that argument would have to be presented to them and I can’t dictate that.

I’ll also take this opportunity to briefly address a document that was presented over the Supreme Court of South Australia case in similar terms. It was written by their barrister Julian Burnside QC, who I would have thought would know better than to get involved in this with his human rights history. I will be reviewing the document in a future entry once I get my podcast out of the way this week.

Bottom line – G & B Lawyers are medically incompetent. They are trying to undermine the flu vaccine and place our senior citizens and our young children in danger from the flu. And the flu is dangerous. I know. It nearly killed me in July 2014, and I was (and still am to a degree) a fit person for someone my age. I wasn’t vaccinated. Dumb move and will never happen again. Same goes for everyone else. Get the flu jab if you don’t have a legitimate medical reason not to. If you do – don’t bother working in child care or aged care because you are a threat to herd immunity. You have plenty of other employment options.

And hopefully the present proceedings against G & B Lawyers presently being investigated by the Law Society of New South Wales result in them being thrown out of legal practice.